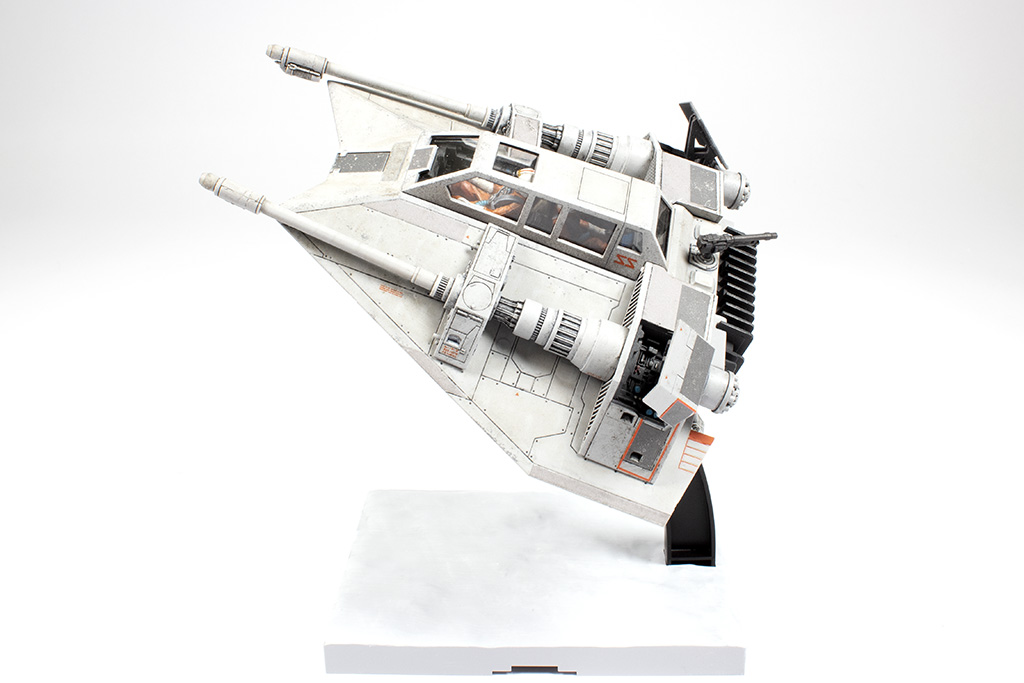 I took this project on as part of my friend Scott Taylor’s #smschallenge2 on The Scale Modeller’s Supply Facebook group. Scott is the proprietor of The Scale Modellers Supply (SMS), purveyor of the fantastic SMS paints range, among other useful modelling tools and supplies. The challenge was to build a Star Wars kit—any Star Wars kit, and kicked off, appropriately enough, on May the Fourth.

Here’s the kit in question:

If you’ve never seen one of these Bandai Star Wars kits in the flesh, you’re in for a treat the first time that you do. They’re really quite amazing, and can literally be built without any glue. The level of detail, quality of moulding, and overall execution of the package is second to none. There are three runners of light grey plastic, one in black, one in translucent red, and a runner for the clear parts that has been stunningly moulded with the black runner!

Getting to first base with this kit is a doddle, though there are traps for the unwary—I did manage to screw up the orientation of a couple of parts, however, which is pretty true to form for me!

One of the more challenging aspects of the build is painting the nicely detailed cockpit. If you’re not feeling up to it, decals (and stickers) are included in the kit to provide console details, but I of course chose the hard way!

While I had the detail brushes out, I also painted the interior of these equipment bays on what I presume are cannon mounts:

Such is the beautiful simplicity of this kit, that once the cockpit was fully painted, the main fuselage (hull?) parts could be assembled:

Of course, this is where my too-early installation of the rear cockpit hood came back to haunt me, as it blocked the rear console assembly from being slid into place! I ended up having to saw the hood off with a razor saw, insert the rear console assembly, reattach the hood (seen clamped after gluing in the photo above), and then blend in the join with Mr. Surfacer 500. Even Bandai kits aren’t safe from my ham fists!

I took a lot of my cues for this build from a 3-part video series by Jon Bius on YouTube, and he suggests leaving the rear section off the model until the very end, whereas Bandai would have you enclose it between the fuselage halves while joining them.

I had a bit of trouble getting it fully inserted properly at the end, so I’m not sure if I would do it that way again.

Another tip I got from Jon’s build is to use the 2-piece canopy solution (rather than the 2-piece all clear alternative), mask the inner clear piece, and then assemble them temporarily for painting and weathering:

Here are all the major assemblies after a couple of light coats of Mr. Finishing Surfacer 1500:

The black areas were painted first with Tamiya Rubber Black. I decided to keep the Mr. Surfacer as the base colour, as it’s pretty close to what I was aiming for anyway, and will make a good base for the subsequent weathering. I also decided to try the kit decals for all the panel variations, rather than mask and paint them.

While the kit decals were OK, I’d definitely mask and paint them next time. For starters, the printing is surprisingly coarse, with the dot pattern quite visible close up. They’re also quite thick, and I had to deal with some residual tenting issues around raised details. And the last issue, one of my own making, is that I misplaced some of the underside panels, creating gaps and misalignments along the way. I decided not to apply two of them at all in the end, as there was no way they were going down over the raised details in those areas (I did try with one of them).

Now I could start in on the weathering, which started with a panel line wash.

This was actually the second attempt at the panel line wash, as my first attempt with oils (my usual approach) all but wiped right off completely during clean up. I had to fall back to some AK Interactive Panel Liner, and even then, it’s still pretty patchy. Ultimately I deepened some of the panel lines around the nose that weren’t holding on to the wash, and reapplied it with more success.

While I waited for those initial weathering passes to dry off, I decided to start painting the two pilot figures, base-coating with Fire Orange from the new Infinite Colour range from SMS:

This was followed by a heavy wash of Burnt Umber oil paint, and then a couple of hours of detail painting and decalling, to arrive at the result below:

And back to the final phases of the weathering process, rendered mostly with filters of oil paint and some chipping with acrylics:

With the weathering complete, final assembly could begin. I elected to use the kit’s display stand for simplicity’s sake, so it was painted up in off-white and black, ready for duty:

Time to install the crew figures:

The final tasks were to paint the inside of the plastic canopy part, along with the rear gun, and then assemble and install both. The gun was painted with RLM 66, given a flat coat, and I mounted the finished model on the display stand at a suitably dynamic angle.

I enjoyed this build tremendously, and am already struggling to resist the urge to crack open another Bandai Star Wars kit immediately! If you haven’t built one, I recommend you do so, and as soon as possible!